Due to heavy rains in UP, schools will remain closed even today in many districts after Yellow Alert Com Auto News 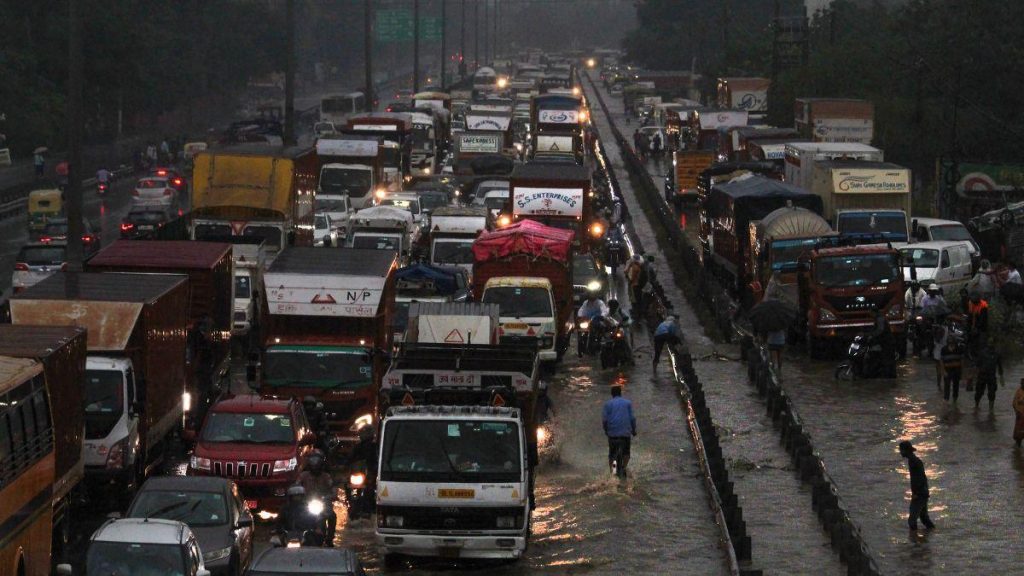 It rained heavily in UP-NCR on Friday as well. Incessant rains for the last three days have caused water-logging in many districts. On the other hand, in view of the rain, all schools from class 1 to 8 will remain closed on Saturday in Noida, Unnao, Sitapur, Farrakhabad, Etawah, Aligarh and Meerut. Even today all the schools in the district were kept closed. The Meteorological Department has issued a yellow alert in many districts of UP including Delhi NCR. Due to this alert, a holiday has been declared in schools. Apart from the common roads of Noida, government buildings and courts have also been flooded. A video of water logging of Gautam Budh Nagar District Collectorate has also surfaced, in which it can be seen how people are entering the water with slippers and shoes in their hands. Related news Prayagraj: 3 killed, mosque damaged due to lightning during torrential rains in Prayagraj, 3 people died and 2 people were injured. Apart from this, celestial lightning fell on a tree in Karchana area. The dome was damaged due to lightning on the dome of the Shahi Masjid of Bada Dara in Bahadurganj area. Lightning struck a house in Kidganj area. Although he has not suffered any damage. Apart from this, rain water was filled in number 21 of Prayagraj High Court. The people present in the court said that due to the lightning falling on the roof, water came in the court. Hamirpur: 500 houses collapsed, a protest against compensation, several days of torrential rains have created a flood-like situation in the district. Many villages have been surrounded by water, their contact with the rest of the place has been lost. The crop is ruined. At the same time, about 500 hundred kutcha houses have collapsed. Hundreds of villagers staged a sit-in outside the DM office on Friday demanding compensation for the loss. At the same time, angry with the lack of any assurance of help from the administration, the people of Kundaura village jammed the Kanpur Sagar National Highway-34 and raised slogans, due to which the traffic was also affected for several hours. Aligarh: No people buried due to house collapse, it has been raining since last 5 days in Aligarh, all safe. Due to rain, a house collapsed at 3:00 pm on Thursday, due to which 9 people sleeping in the house were buried under the debris. However, with the help of local people, everyone was safely evacuated. He has suffered minor injuries. CM Yogi did an aerial survey of the flood affected areas, the effect of rain is visible in eight districts of western UP. At the same time, CM Yogi Adityanath took stock of the flood-affected districts of Gorakhpur and Sant Kabir Nagar. Apart from this, an aerial survey of the flood affected situation in Basti, Ayodhya, Gonda and Barabanki was done. This is why the rain in Delhi-NCR is due to sudden change in weather and rain in Delhi-NCR due to the coming together of two systems. The first system is a low pressure system, due to which a cyclonic circulation is created in the lower atmosphere. This system is active over North West Madhya Pradesh and South West Uttar Pradesh. It is currently seen to be active towards the areas of western Uttar Pradesh, southern Haryana and Delhi NCR. On the other hand, the second system is of a Western Disturbance, which is active in the upper part of the atmosphere. Along with this, westerly winds are also blowing. These winds are also called Mid Tropaspheric Westerly. If the second system was not present, then the first system would have moved towards the west, but the second system has stopped the first system in this area, which will continue to rain for the next 2 days. Both the strong systems can remain in Uttar Pradesh, South Haryana and Delhi NCR till this weekend.