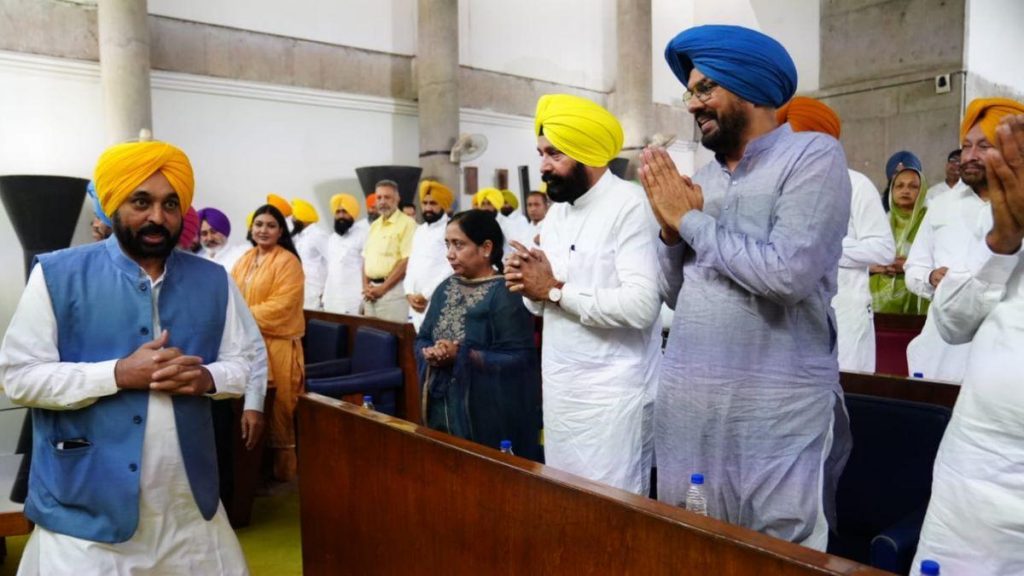 In Punjab, the tussle between the ruling Aam Aadmi Party and the opposition Bharatiya Janata Party is expected to intensify on Thursday. Where after the cancellation of the demand for a special session by Governor Banwarilal Purohit, all the AAP MLAs led by Punjab Chief Minister Bhagwant Mann have announced to take out a peace march from the assembly to the Raj Bhavan. So at the same time, BJP has announced to gherao the house of CM Bhagwant Mann in this matter. In fact, in Punjab, the Aam Aadmi Party had made preparations to hold a trust vote by convening a special session. But Governor Banwarilal Purohit canceled the special session. He had argued that the government itself cannot bring a confidence motion in the assembly like this. There is no provision in the constitution for this. After this decision of the Governor, CM Bhagwant Mann has called a cabinet meeting. In this, the current political situation will be discussed. After this meeting, all 92 MLAs under the leadership of Mann will march from the assembly to the Raj Bhavan. This march is against the alleged Operation Lotus. Related news There is a constitution and rule of law in the country. Governments are formed and run by the majority of the people. But BJP and Congress together are insulting the vote of Punjab. The sold Congress is supporting BJP’s #OperationLotus in Punjab. This truth has come in front of Punjab and the whole country. — AAP Punjab (@AAPPunjab) September 22, 2022 The Aam Aadmi Party has accused the BJP of trying Operation Lotus in Punjab after Delhi. AAP alleged that BJP tried to buy AAP MLAs in Punjab, however, it was unsuccessful. After this, CM Bhagwant Mann called a special session and announced to present the trust vote. But the governor did not allow it. BJP will gherao CM residenceBJP Punjab state president Ashwani Sharma targeted Chief Minister Bhagwant Mann. He welcomed the governor’s decision. He said that this decision is in accordance with the Constitution and he has exercised his right in the interest of the people of Punjab. Sharma said that everything said by Kejriwal for Bhagwant Mann is a constitution and he considers it his utmost duty to follow it. Ashwani Sharma said that a letter was also written by the Bharatiya Janata Party to the Honorable Governor in this regard. Questioning the decision of the Aam Aadmi Party, the Governor is calling it a murder of democracy, which is highly condemnable and indecent. He said, BJP will gherao the residence of Bhagwant Mann against this.