The story of the 43-year-old revolution, when Iran was changed overnight, today women’s war against hijab Com Auto News 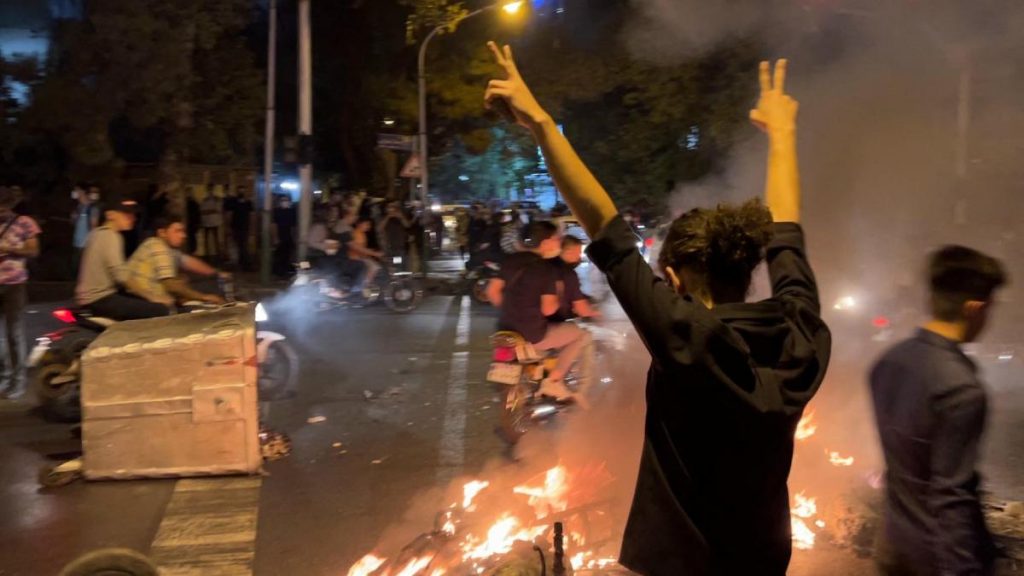 
Women are cutting their hair in Iran. She is flying her hijab in front of the security forces and is challenging her to be arrested. Slogans are being raised against the government. City cities are burning. The government is lathi-charging the protesters to suppress the protesters. So far three people have also been reported killed in these demonstrations. Dozens have been injured. But the demonstrations are not stopping.

The reason for these demonstrations is 22-year-old Mehsa Amini. Mahsa Amini is no more in this world. He died on 16 September.

The family alleges that the police had beaten up Amini badly. Due to this she went into a coma and she died in the hospital. Since the death of Amini, demonstrations have been taking place in Iran. Slogans are being raised against the government. Women are protesting by cutting their own hair. Flying hijab in front of security forces.

After this whole incident, the ‘Anti Hijab’ movement has intensified in Iran. Women are demanding freedom. Men are also supporting them. All this has brought back memories of the ‘Islamic Revolution’ that happened four decades ago. Then there was a revolution against openness and now there are demonstrations for the same demand.

What is its history?

It is the year 1936. Then Iran was ruled by Reza Shah of Pahlavi dynasty. He did not like hijab and burqa. He banned it. Women who wore hijab or burqa were harassed. This step was very revolutionary in terms of women’s freedom.

Later Reza Shah had to go into exile. After him his son Mohammad Reza Pahlavi was placed on the throne. A new constitution came into force in Iran in 1949. Mohamed Mossadiq became prime minister in 1952, but was overthrown in 1953. After this Reza Pahlavi became the sovereign of the country.

Some people were also angry with the decision to ban the hijab and burqa. The result was that men stopped women from leaving the house. Reza Pahlavi gave some relaxation in this rule, but he was also in favor of Western civilization. At that time the opponent of Reza Pahlavi was Ayatollah Ruhollah Khomeini. In 1964, Pahlavi expelled Khomeini.

People started calling Reza Pahlavi a ‘puppet’ in the hands of America. Khomeini took advantage of this public anger and started the Islamic Revolution.

Then the revolution started in Iran…

Although the beginning of the Islamic revolution in Iran is considered to be in 1978, but its seeds were planted only in 1963. Then the ruler of Iran, Reza Pahlavi, announced the White Revolution. This was a big announcement in terms of economic and social reforms. But it was taking Iran towards the values ​​of Western countries. There was opposition to it in the public.

Then came the year 1973. Crude oil prices started declining in the international market. It crippled Iran’s economy. But Reza Pahlavi was engaged in dreams of making the White Revolution a success. The clerics of Iran called it an injury on Islam.

By the time of September 1978, public anger broke out. Protests started against Reza Pahlavi. The leadership of these demonstrations was taken over by the clerics. These clerics were getting instructions from Ayatollah Ruhollah Khomeini sitting in France. After being deported in 1964, Khomeini went to France.

Meanwhile, the anger against Reza Pahlavi was increasing. Martial law was imposed in the country to pacify the people. By January 1979, there was a situation of civil war in Iran. On the one hand people were demanding the return of Khomeini and on the other hand the army was firing on them.

After the situation became uncontrollable, on January 16, 1979, Reza Pahlavi moved to America with his family. Before leaving for America, Reza Pahlavi made opposition leader Shapor Bakhtiyar interim prime minister.

In the capital Tehran, Khomeini announced the formation of a ‘government’. It is said that a crowd of more than one lakh people had gathered to hear his speech.

The government was getting weaker and Khomeini stronger. There was also a split in the army. On 20 February, the Imperial Guards loyal to Reza Pahlavi attacked the Air Force in Tehran. The demonstrations had now turned violent. Gradually, the army also kept bowing in support of Khomeini.

Before the 1980s, Iran had the same openness as it was in the West. Women had the freedom to wear clothes of their choice. She could hang out with men. But the Islamic Revolution completely changed Iran. It ‘closed’ Iran to ‘open’.

A referendum was held in late March of 1979. In this, more than 98 percent of the people voted in favor of making Iran an Islamic Republic. After this the name of Iran became ‘Islamic Republic of Iran’.

Sharia law came into force in Iran after the new constitution. Many restrictions were imposed. Women’s freedom was taken away. Now they were required to wear hijab and burqa. In 1995, such a law was made there, under which officers have the right to put women up to 60 years in jail without wearing a hijab. Not only this, not wearing a hijab in Iran can result in a sentence of 74 lashes to 16 years in prison.

The Siege That Weakened America

In the midst of the Islamic revolution, such an incident also happened, which had made a powerful country like America weak. What happened was that people were demanding the return of Reza Pahlavi. He said that Reza Pahlavi should be brought back to Iran and punished. At that time, US President Jimmy Carter allowed Reza Pahlavi to come to New York and get treatment for cancer. This increased the anger even more.

On 4 November 1979, Islamic students gathered outside the US Embassy in Tehran. They laid siege to the US embassy. Khomeini also supported this siege. The protesters were demanding the US to send Reza Pahlavi back, but the US turned it down.

Days were passing by, but the protesters were not agreeing to leave the embassy. The United Nations also took the initiative, but to no avail. There were 52 American hostages in the embassy at the time.

About a year after this siege, Reza Pahlavi died in Egypt. He was buried there. But the siege of the embassy continued. America tried its best. The properties of Iranian people in America were also confiscated, but nothing worked.

Eventually elections were held in America and Ronald Reagan became the new President. Then in Algeria, an agreement was reached between the US and Iran. Then the hostages were released. The protesters held US Embassy officials hostage for 444 days.

In Iran, now Ayatollah Ruhollah Khomeini’s successor Ali Khomeini is the sovereign of the country. Strict Sharia law is in force in Iran. But now the voices of protest have also started rising.

The anti-hijab movement has intensified after the death of Mahsa Amini. Women are demanding freedom. She is cutting her hair. Hijab is flying in the wind. The government is taking all necessary steps to suppress these demonstrations, but the protesters are not calming down.

However, Amini is no longer in this world. The government is saying that he had heart disease, which led to his death. So the relatives and the protesters are calling it a murder. But the kind of demonstrations that are taking place in Iran after the death of Amini, they bring back memories of the Islamic Revolution of 1979.