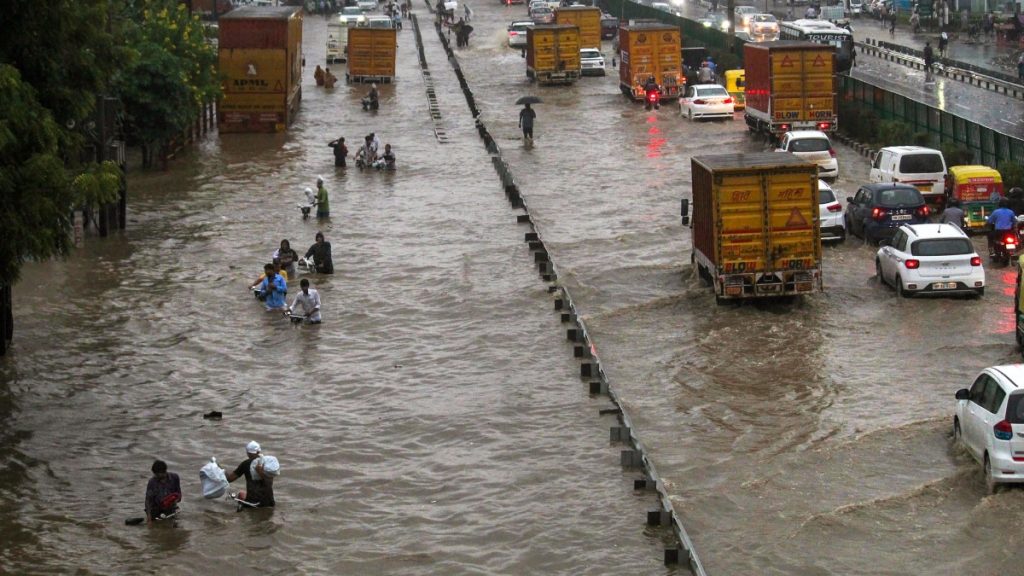 Due to the change of weather in UP including Delhi-NCR, heavy rain was seen on Thursday. The National Highway and Expressway were affected by the rain. Due to the day’s rain, the streets were flooded with water. A long jam of more than 5 km was seen. Weekend rains can become a problem in UP, Delhi, Haryana. In such a situation, on Friday, it has been decided to keep schools closed in many places including Noida, Gurugram. At the same time, in Gurugram, Haryana, the district administration has issued an advisory. In this, private institutions have been asked to instruct all employees to work from home on Friday. Fresh rains in the national capital region just before the withdrawal of monsoon will help to cover the major damage to some extent. Due to this the air will also be clean and the temperature will also be controlled. Till the morning of September 22, 46 per cent rain had been received. Delhi recorded a minimum temperature of 23.8 degrees Celsius and a maximum temperature of 28 degrees Celsius, seven notches below normal. The 24-hour average Air Quality Index improved from 109 on Wednesday to 66 (Satisfactory Category) at 4 pm. Schools up to class 12th will also remain closed in Gurugram, while the district administration of Gurugram has issued an advisory. It said that in view of heavy rains in Gurugram on September 23, all corporate offices and private institutions in the district are advised to work from home for employees to avoid traffic jams and carry out repair work. Apart from this, all the private educational institutions in the district have also been advised to declare 23 September as a holiday in their schools or colleges in public interest. Schools will remain closed in Noida-Greater Noida as well, due to heavy rains, an alert has also been issued in Gautam Budh Nagar. On behalf of the District Magistrate, it has been said that due to heavy rains, all the schools from Nursery to Class VIII in Noida-Greater Noida will remain closed on Friday. Please tell that it is raining heavily in the district for 2 days. This was the rain in Delhi on Thursday, Delhi’s Meteorological Center Safdarjung has recorded 31.2 mm of rain between 8:30 am and 5:30 pm. The weather stations at Lodhi Road, Ridge and Ayanagar received 27.4 mm, 16.8 mm and 45.8 mm of rainfall during this period. Delhi University area, Jafarpur, Najafgarh, Pusa and Mayur Vihar recorded 16.5 mm, 18 mm, 29 mm, 24.5 mm and 25.5 mm of rainfall, respectively. The Safdarjung center has recorded 58.5 mm of rain in September so far (till Thursday morning) against the normal 108.5 mm. August recorded 41.6 mm of rain, the lowest in 14 years. Moderate rain may occur on Friday, a warning has been issued in Delhi regarding moderate rain in most places on Friday. It was told from the Palam Center that between 8:30 am and 8:30 pm on Thursday, about 81 mm of rain was recorded. Let us tell you that rain recorded below 15 mm is considered light. Moderate between 15 to 64.5 mm, heavy rain between 64.5 mm and 115.5 mm. At the same time, there is very heavy rain between 115.6 and 204.4. Extremely heavy rainfall above 204.4 mm is considered. Firozabad-Kanpur: Firozabad of UP has also been waterlogged due to holiday rains on Friday in all schools. There BSA Anjali Aggarwal told that due to rain, all private and government till 8th in Firozabad district will be closed on Friday. Similarly, in view of the possibility of heavy rains in Kanpur, the DM has ordered to keep all the schools closed till 12th on 23rd September. Etawah: Bad weather and torrential rains are also occurring in Etawah of UP, closed for three days. The DM has told that the government and non-government schools and colleges of the district have been closed for three days (from September 22 to September 24) at the basic and secondary level. Gurugram: 5 KM long jam occurred in Gurugram and Faridabad, it is raining heavily. Due to rain in Gurugram, there has been a 5 KM long jam on the highway. The service lane of the highway is also filled with rain water. Due to which there is a queue of vehicles. It has been raining intermittently in Faridabad since 11 am. Due to which there is a situation of water logging in many places. The Meteorological Department (IMD) has issued a yellow alert for Thursday and Friday regarding rain. see also