Britain: Once again a ruckus outside the Hindu temple, a crowd of 200 people gathered, slogans of Allah-hu-Akbar were raised Com Auto News 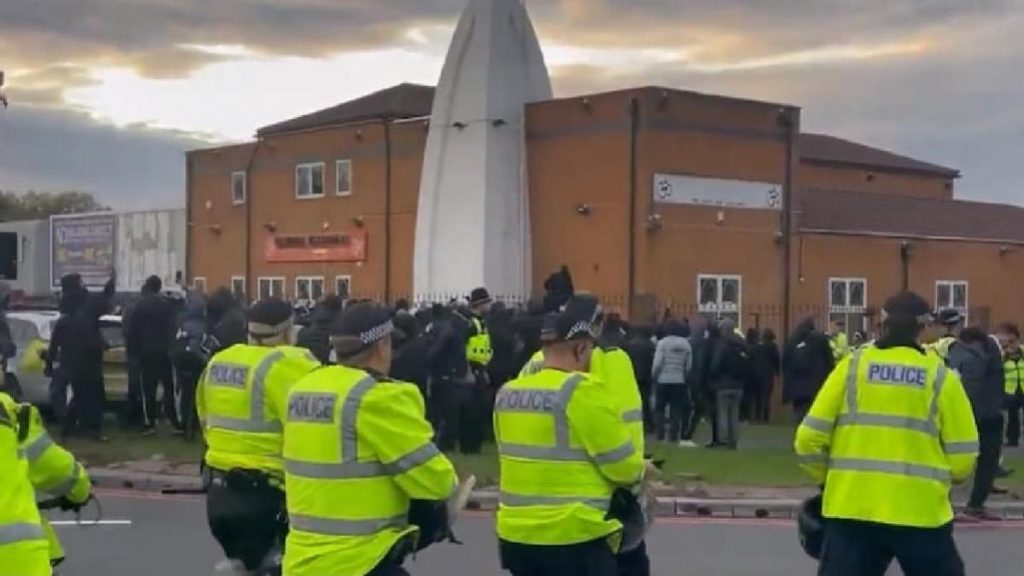 
On Tuesday, a crowd of about 200 people created a ruckus outside a Hindu temple in Smethwick, West Midlands, England. Most of these protesters belonged to the Muslim community. During this, the protesters raised slogans of Allah-hu-Akbar. It is being described as a kind of planned performance.

In the video of the incident shared on social media, a large crowd of a particular community can be seen marching towards the Durga Bhavan Hindu temple at Spawn Lane. Many of these protesters can be heard raising slogans of Allah-hu-Akbar. Seeing the situation becoming uncontrollable, the police was informed about it. The police who reached the spot tried to control the situation but some protesters climbed the walls of the temple.

How did the crowd reach outside the temple?

According to a Birmingham World report, a social media account named Apna Muslims had called for a peaceful protest outside the Durga Bhavan temple on Tuesday. After this, on Tuesday, a huge crowd started gathering outside the temple and started shouting slogans.

On this matter, the priest of the Hindu temple has said that people of all communities come to our temple. A conspiracy is being hatched to spoil the situation here. But there is no problem from our side.

On the other hand, Ragih Muflihi, president of the Imam group and president of the multi-religion group in Sandwell, said that leaders of all religions will not allow any unpleasant situation to spread.

Police immediately rushed to the spot after receiving news of a disturbance outside a Hindu temple in Smethwick. Police said that we had received information that protests were taking place in West Bromwich. The reason for this was a speaker’s program at the temple in Spawn Lane. However, it was told that later the event has been cancelled. Along with this, the person who was being opposed is not living in the UK.

The police spokesperson said that we have a long history of facilitating peaceful protests and upholding the right to protest. But the general public should not be inconvenienced by such demonstrations, it is also to be taken care of.

There was sabotage in Leicester, England

The incident comes at a time when violent clashes broke out between the two sects in the city of Leicester, east England, after last month’s India-Pakistan cricket match. During this, the Hindu temple was vandalized and the saffron flag above the temple was taken down and thrown.

The police had termed the incident as a case of serious disorder. After this, the Indian High Commission in London had to strongly condemn the incident by issuing a statement. The commission condemned the violence against the Hindu community in Britain and called for protection to the affected. So far 47 people have been arrested in this case.